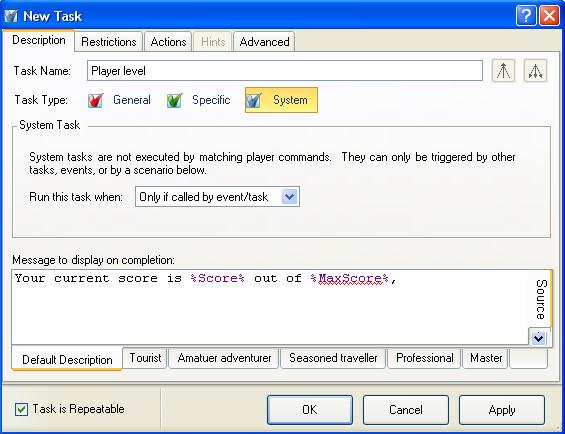 System Tasks are just the same as any other tasks except they are not triggered directly by what the player types at the command line. In most cases, they are just called by other task actions, or by events. However, there are other ways of triggering them also. The options for triggering a System task are:

The first option here is the default. Basically this means that the task is never triggered automatically. If you select one of the other options, you can still call the task from an event or other task.

The second option is useful for initialising things at the start of the game. For example, you may want to set variables to random values, place characters randomly within a location group, or ask the player to enter their name, gender and age.

The third option is useful, because it triggers whenever the player enters a particular location. You could override the 'Player Movement' task, but if the location had several entrances then you would need to override each entrance. This task ignores which entrance you came in, and will trigger as soon as you arrive at the specified location.