Warning: Private methods cannot be final as they are never overridden by other classes in /homepages/17/d480683305/htdocs/w/includes/actions/Action.php on line 67
 General tasks - ADRIFT 5 Manual Wiki

General tasks are used to add a new command that is not provided by the standard library.

To create a new General task, click on the Task button at the top of the screen, or right-click in a folder and select Add New > Task. This brings up the New Task form. This defaults to Specific tasks (more on these later) because that is the most common task type, so click on the General button to change the task type. This should bring up a screen like so: 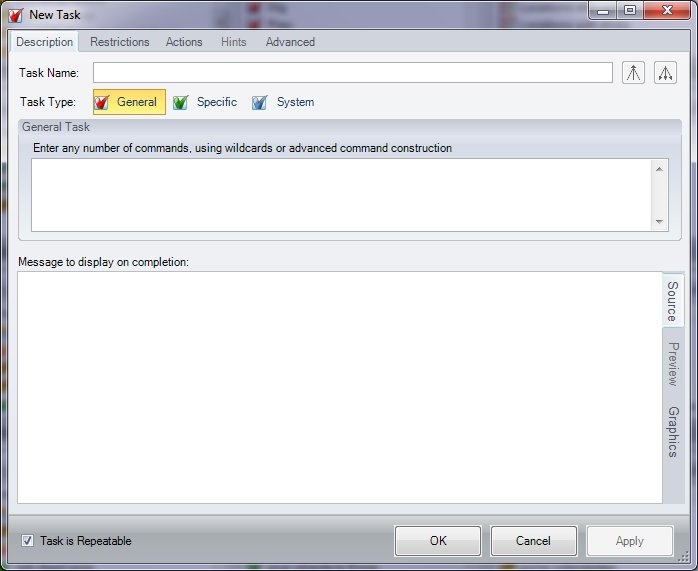 Here, you must specify the command that the player must type in order to match this command. A really simple case might just be something like:

Then, whenever anyone types the command "dig" into Runner, this task will match. If a task matches the command, its restrictions will be checked, and if all restrictions are met, the task will run. So General Tasks essentially enable you to create new verbs that the parser understands.

There are several problems with this. The first, is that the player might type something slightly differently in the game, but mean the same thing. This is commonly known as "guess the verb". For example, the player might be holding the vase, and type "put the vase down". Obviously this wouldn’t match the command you specified. To get around this there are three things you can do. Firstly, you can enter multiple commands. So, you could set the task up with the commands:

So now, we instantly have three ways we can match this command. In this example, having three commands isn’t too bad, but consider a slightly more complicated example of putting something inside something else. You could have:

Etc etc. As you can see, the number of possibilities can rapidly increase the more complex the statement becomes. To get around this problem, ADRIFT understands "advanced command construction". This allows you to create multiple ways to define the command on a single line.

So going back to our earlier example, you could reduce this from three commands to two:

Similarly, the second example above could be reduced from 36 individual commands to the following:

A third way of matching commands in ADRIFT is to make use of wildcards. This allows you to match anything a user types against part of your command. For example, you could create a command:

(note the lack of space between in and *)

This would now match anything such as "drop the ball in the box", or "drop match into the large can of petrol".

A word of warning though; wildcards really are just that. They could end up matching on things that you really haven't considered when designing the game. For example, it would also match on "drop everything except the match into the petrol". This may end up being the exact opposite of what you intended. Therefore, it is recommended you use wildcards only when absolutely necessary.

In the examples above, we refer to an object "the vase". This object may have been defined as

Because of the articles "large" and "fragile", which may or may not be used when referring to the vase, we need each command to understand both the articles being there and also not being there. The object could also have been set up with alternative nouns (a cup could be a mug, a lamp a light, a box a carton etc), and we would have to cater for all of these4.

To make things easier, ADRIFT has the concept of References. There are several types of references. These are Objects, Characters, Directions, Number and Text. References are essentially placeholders within the task command that can match on any object, character etc. References are simply entered as a keyword between two percent symbols. So to recreate the earlier example, we would have:

This greatly simplifies how you define the task commands, as you do not have to consider all the ways of writing object/character names. Also, if you later change the object name, you don't have to go back and change all your tasks. Simply put, General Tasks should never refer to object/character names unless absolutely necessary.

You can also have multiple references within the same command, for example:

If you have multiple commands within the same task, each command must contain the same references. So in the first references example, both commands contain %object%. You couldn’t create another command that missed the reference out.

A full list of references that ADRIFT understands is as follows:

%object% %object1% and %objects% all refer to the same reference. You cannot use more than one of these in the one task. The second object reference should always be %object2%.

In the current version (5.0.32) all references of the same type must be in numerical order! You can have %objects% %object2% but the order %object2% %objects% will not work.

You will notice the plural references %objects% and %characters% above. These references are even more powerful than the other references, because they can match on multiple objects. So you could refer to, for example, "the red ball and the green ball", "all except the pink ball" or "all small balls".

The %item% reference allows the player to enter the name of an object, a character or a location. Hence you could make a "smell %item%" task which prints the value of an item property that specifies the odour of anything in the game.

As soon as you create a reference in your task, all the Restriction and Action dropdowns have extra options in them to allow you to test and manipulate whatever object or character the player refers to. So in our "drop" command above we can add a restriction that the referenced object must be held by the player. If so, our task will match and we run its actions, which we could define as moving the referenced object to the same location as the player.

Scope refers to where ADRIFT will look when you refer to an item. ADRIFT 5 has three levels of scope. These are Applicable, Visible, and Seen. Visible and Seen should be pretty obvious. Applicable means it must match any task restrictions on the task creating the reference.

You may add a restriction that the referenced object must have a property 'edible'.

2 General Tasks are the equivalent of normal tasks in ADRIFT 4.

4 For those of you familiar with ADRIFT 4, this was one of the problems with the parser, because the task command may not cover all the possibilities of the built-in parser.

Message to display on completion

In the bottom half of the Description page is a text box that contains the message to be displayed if this task is matched to the user input and passes all of its restrictions.

As well as displaying text (which can include General Functions) a text box can also control the display of images and the playing of sounds at the same time as the text is output.

A text box can also use Alternate Descriptions to change the text that is output in different circumstances.