Warning: Private methods cannot be final as they are never overridden by other classes in /homepages/17/d480683305/htdocs/w/includes/actions/Action.php on line 67
 Variables - ADRIFT 5 Manual Wiki

There are two types of variables in ADRIFT. These are Numeric (Integer) and Text. Both variable types can also be created as arrays (a set of variable values which can be accessed by a unique index starting from 1).

Variables can be compared with other values in Restrictions, and altered using Actions.

Properties and references can also be used in a similar way to variables.

Certain variable names have been reserved for System variables. These can be used in any text box to display the indicated value. Of these only 'Score' and 'MaxScore' can be written to, the others are read-only.

Only ever add a simple constant to Score in an action, eg. "Increase Score by 12".

If you want a different scoring system than this then create your own variable and use that for scoring, not %Score%.

Never alter the MaxScore variable, it is set automaticaly to the sum of all of the constants that are added to the %Score% variable in the entire game.

Note: It is currently not possible to test Turns or Version in a restriction.(version 5.00.21)

Variables can be displayed in any output text with the following syntax.

For example, let's say you have a variable that tracks the number of some visible object. If it can change throughout the game, you can use a variable in the description of a room or whatever else to reflect that number.

You can also specify for integer values to be displayed as words:

A text array can be used in an expression or directly in a text box to vary the text that is displayed to the player.

%my_text_array[%my_variable%]% ==> Uses an integer variable to select which text string to display. 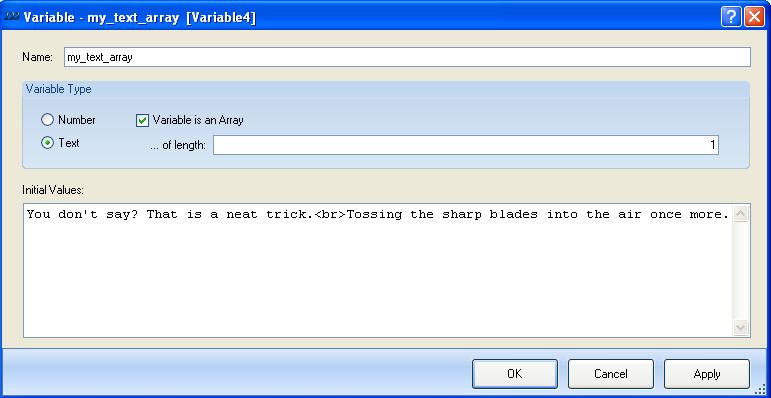 The array element shown above will be displayed as: