A group is a collection of similar items.

There are 3 types of group in ADRIFT, Location groups, Object groups and Character groups.

Groups can be used as a simple way to determine if two items are related to each other, but can also be used to set a particular property of all of its members to the same value.

Locations are placed into a group by selecting "Locations" for the group type and then ticking the box next to each location that you wish to be a member of this group. 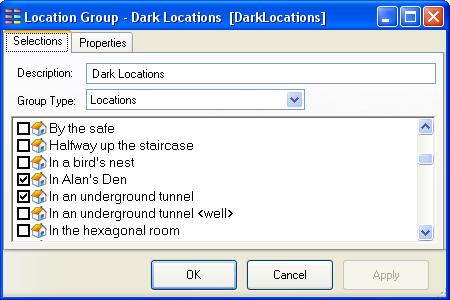 During the game, locations can be added to or removed from the group using actions.

There are four main uses of location groups: 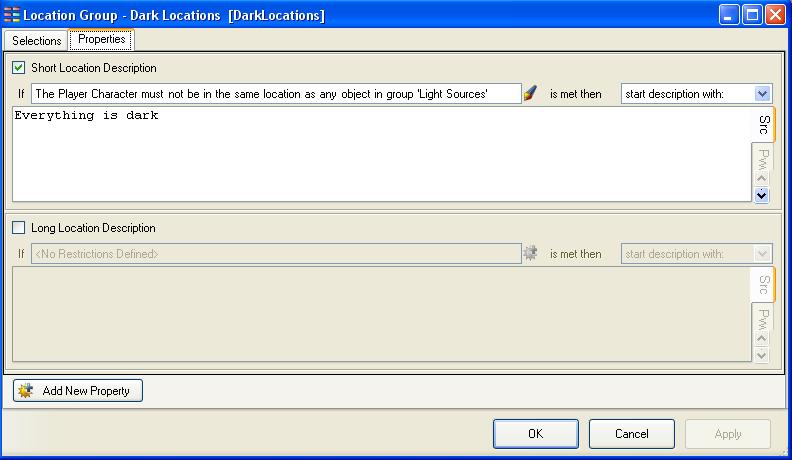 Properties that are NOT selected on this page will use the settings defined on the property pages of the individual locations.

In the case of a text property, as shown above, we are actually entering an alternate description for the text box. If the restrictions pass then the text given will replace or be added to the text normally output for the location, if they fail then each location will output its own text.

Object classes are simply groups of objects, where you can pre-define particular properties. When an object is added to this group, it automatically inherits all of these properties.

So, for example, you could create an object property “is a liquid”. If you then create a group “Liquids”, you can select the “is a liquid” property. Then, any objects you add to this group will automatically inherit the “is a liquid” property. You can then set up tasks where, instead of checking for specific objects, you can specify that they should be a member of the group. So in this example, you could create a task “take %object%”, and have a restriction that the task should not be a member of group “Liquids”, else output a message saying you cannot pick that up with your hands.

Objects can also be moved in and out of groups by actions. For example, you could have a class of object that produces light and so allows the player to see when they are in a dark location. But if a lamp is switched off or the battery goes flat then you don't want them to be able to see anymore. This can easily be done by moving the lamp into the "Produces light" group when it is on, and removing it from the group when it is off.

Characters can also be placed into groups, so a class of school students could be placed together into a group so that the game can have them all react to the player the same way without having to add an individual restriction for each one.

In a role playing game with different "factions", the members of each faction can be placed in a group so that each individual knows how they should react to a member of a particular faction.