Warning: Private methods cannot be final as they are never overridden by other classes in /homepages/17/d480683305/htdocs/w/includes/actions/Action.php on line 67
 Is this character known to the player - ADRIFT 5 Manual Wiki

Is this character known to the player

This is a selection-only property of Characters.

This property should be set for any character that the player's character would be expected to know, or can be set during the game if the player discovers their name..

This property changes the description of the character

If this property is not set then ADRIFT uses the Article, Adjective and Noun fields to describe them.

If this property is set then ADRIFT prints the characters proper name.

If the player uses the "kiss %character%" command on a character that does NOT have this selected, and tries to use their proper name, then ADRIFT will not recognise the name and they will get the following failure message:

If the character has this property, then the "kiss %character%" general command will respond as follows:

To actually allow the player to kiss a character you will need to override the "Kiss character" general task with a specific task for that character which describes the effects of kissing her.

Changing an unknown character to a known one during the game

In the above example we have created a conversation topic in which the character tells the player his name. On the Action tab of the topic we add a new action which sets this property to selected.

If the player discovers the character's name as the result of a task (such as reading a specific sign with their name on) then this action would be added to that task.

The value of this property can be accessed (as the value 0 or 1), or used to filter a group, with the %character%.Known function

This property is defined in the "Properties" folder of The Standard Library. 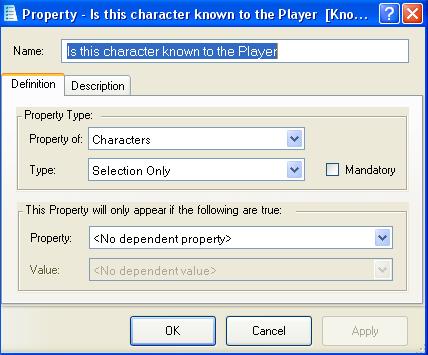