The "Actions" tab of a task or character conversation topic contains a list of actions which are performed in order when a task is executed and passes all of its restrictions. 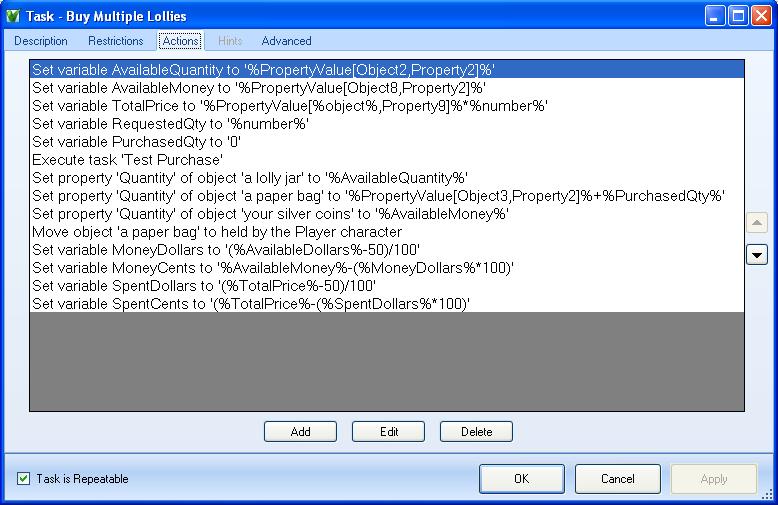 The action editing window contains 9 tab pages, one for each category of action that can be performed:

This has 3 main options: move an object, add object to group, and remove object from group. The object can be:

As well as adding or removing the selected object from a group, the object can be moved to:

Any of these characters and objects can also be a referenced character/object.

The selected character(s) can be moved to:

This action can also be used to change the "point of view" of the player, allowing them to play as different characters in the game world. Use [move][character][ The Player Character ][to switch places with] the character they are to play as.

This option adds and removes locations from location groups. The location can be:

The task actions allow you to either execute or unset another task. This task can be of any type, general, specific or system. Unsetting a task simply clears the flag that indicates that the task has been run at least once. This allows a non-repeatable task to be run again.

When an action executes a task, this new task acts like a subroutine, checking its restrictions are valid, displaying its own text box and running its own actions before returning to complete the remaing actions in the first task.

If the general task to be executed uses references such as %character%, %object%, %number% etc., then a button marked "params" appears. Pressing this button will open a separate dialog box for each parameter, one at a time in the order they appear . This can pass on the referenced item from the first task, specify a particular item to use, or use a formulae to calculate the value to be passed to the sub-task.

Tasks execute multiple times if parameter is a group

If you use a group as a parameter, or any property that has the

icon such as %Player%.Held, %Player%.Worn, %object%.Contents etc, then the task is executed once for each item in that group.

If the task has multiple parameters then the task will run once for every possible combination of those parameters.

For example, say you are executing a general task that has the references %object% %character% %location% and you pass the parameters: Player.Held, Player.Location.Characters, Group1.Outdoor

If Player is holding 5 objects, there are 4 characters at players location, and Group1 contains 10 locations, then the task will be run 5*4*10 = 200 times!

If you tick the "I need a Loop" box then you can enter two numbers that specify a range of values:

This can be used to execute a task multiple times. If you use the loop control variable %Loop% as the %number% parameter passed to the task, then it will be run once for each integer value from the first specified number to the second. The %number% reference of the task will be set to the next %Loop% value each time it runs. eg. If you specify "FOR Loop = -2 to 2" then the task will be run five times, with it's %number% reference set to the values: -2, -1, 0, 1 and 2.

This value can be used to access an element of an array in the called task. If you have a text array variable called "Weekdays", that contains the names of the days of the week, then %Weekdays[%number%]% will print each of the days if you call the task with "FOR Loop = 1 to 7".

If a task is already going to run multiple times because you have passed multiple items to it (such as a group or the list of objects held by the player) then it will run the task for all combinations of these items with %Loop% at it's initial value before incrementing %Loop% to the next value and running all of those combinations again. The position of the %number% reference relative to other references does NOT affect this.

The first drop-down list is used to specify whether the variable is to be set to a particular value, or increased/decreased by the given value.

Either a number, text inside "quotes", or an expression can be entered in the last field to calculate the value to be written to the variable. This equation can use Variables, Properties, References and Functions in the calculation.

If "I need a loop" is selected then you can specify a range of index values to write to several elements of the array at once. This functions like a for loop in a programming language, recalculating the expression for each array index in the sequence.

The counter variable %loop% contains the index being written to and can be used in the expression as a value or to index into another array. eg. "Set [MyArray][Loop]=[%MyArray[%Loop%]+1]" will increment each element of MyArray.

If you are also using the increment/decrement options then the calculated value will be added to or subtracted from the current value of that array element.

You can "Ask", "Tell" or "Say" anything to a specific character or to the referenced character.

These actions contain a text entry field which is checked against the conversation items of the selected character.

The final two actions, "Enter conversation" and "Leave conversation" are used to select which character key will be returned by the %convcharacter% function. This character therefor becomes the default character for any ask, tell or say commands entered by the player.

Using any of the Ask, Tell or Say actions will also enter conversation mode with the character.

The "Enter conversation" action is provided so that the character can start a conversation with the player when they enter the location or type a particular command.

Leaving the location will also leave the conversation.

It is important to note that the

icon at the left of the entry fields is actually a button that toggles between 3 states and determines what is listed in the first drop-down menu.

Objects and characters can be either specific or referenced. Once the object, character or location is chosen, a list of applicable properties can be selected from the next drop-down list. Finally the value to be assigned to that property can either be chosen from a drop-down list, or an expression entered to calculate it (depending on the type of the property).

Allows the task to skip a certain number of turns. The specified value is added to the %Turns% counter of the game.

This is the simplest tab and only has 3 options, all of which end the game:

The "End of Game" message is then displayed (see Introduction & End of Game), followed by the line: "Would you like to restart, restore a saved game, quit or undo the last command?"