Warning: Private methods cannot be final as they are never overridden by other classes in /homepages/17/d480683305/htdocs/w/includes/actions/Action.php on line 67
 Running games - ADRIFT 5 Manual Wiki

You can download these games, play them online, and read their reviews.

ADRIFT games will either be .TAF files or .BLORB files. A .TAF file could also have image and sound files associated with it, in which case it will probably be provided as a zip file that you need to unzip before playing.

Right click on the .TAF file and select 'Play' to start the runner. Alternately, you could also start the ADRIFT Runner from the start menu and use the 'open adventure' icon to locate the .TAF or .BLORB file that you wish to play.

ADRIFT Runner is the application, which takes the adventure files created with Generator, and interprets them as an adventure. Runner attempts to recreate the traditional adventure environment as introduced to computers when adventures first came out, but it also improves on this by supplying extra functionality such as a realtime map, optional control panel (to use the mouse instead of keys), general point-and-click, colour customisation, automatic text completion, and a high-score table. 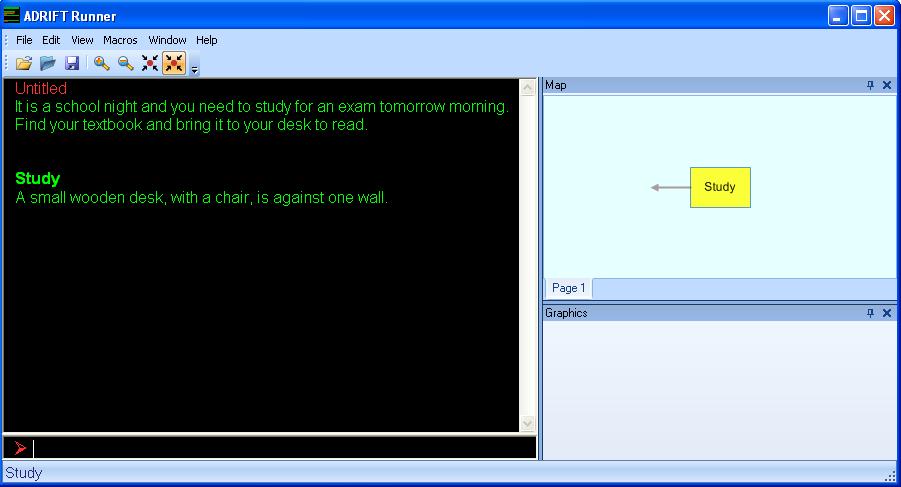 To the right is a map that shows the locations that the player has visited so far, and below that is a window where the game can display images if it chooses to do so.

In addition to the commands for the actual game, the runner supports the following special commands:

You can also enter 'Save as' to show the save-as dialog and save to a different file than previously, or 'Save "Filename"' to directly specify the name of the file to save to.

If you have changed the Library Settings in the Developer to use a different library than the standard library, and you wish to play an ADRIFT 3.9 or 4 game, then you must temporarily change the library settings so that StandardLibrary.amf is one of the selected libraries BEFORE you start the runner and open the game. In version 5.0.33 and later you can have other libraries selected as well, but not in earlier versions.