Warning: Private methods cannot be final as they are never overridden by other classes in /homepages/17/d480683305/htdocs/w/includes/actions/Action.php on line 67
 Options - ADRIFT 5 Manual Wiki

The ADRIFT "Options" page contains information about the game, and options used to control how the runner will behave when playing this game.

button on the main toolbar ribbon to open the game options dialog: 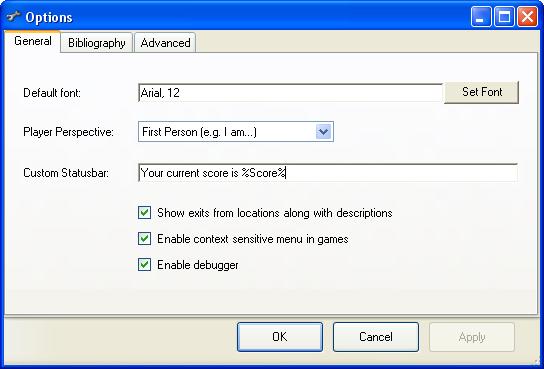 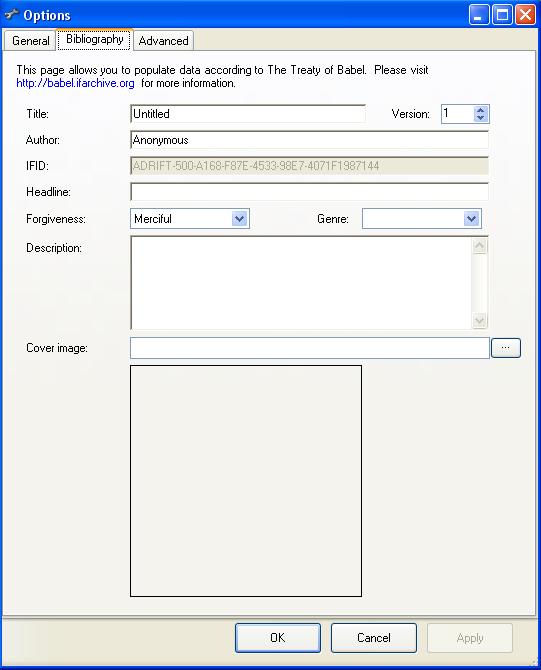 This is where you enter information about your game such as what it is called, who wrote it, and what type of game it is.

You can also supply an image that is used as the splash screen when the game is run. In addition to being displayed on startup of your game, the image will automatically appear next to your game when you upload it to the Adventures page as a .blorb file.

The IFID field is a globally unique identifier that uniquely identifies a particular game. This number is automatically created by ADRIFT to ensure that no two games can ever have the same IFID (even if they happen to have been called the same name by their authors). Note that if you are editing your game and use "Save As" rather than "Save", ADRIFT will generate a new IFID and the resulting game will be considered a different game from the original, not just a new version.

This information can be extracted from the game file by any tool that is complient with the treaty of babel. 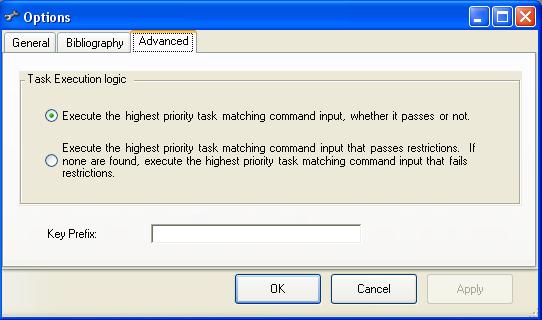 This tab is not available in Simple mode

ADRIFT 4 uses slightly different logic than ADRIFT 5 when choosing which tasks to execute. This option will be automatically set depending on whether this game is a converted ADRIFT 4 game or a new ADRIFT 5 game. Do not change this for ADRIFT 5 games as the standard library will not work properly.

If the first option is selected then the highest priority task is executed whether it passes restrictions or not, and lower priority tasks are only used if that task has no text output at all, or if it has multiple matching enabled.

There are two checkboxes on the Advanced tab of tasks which can be used to fine-tune this behaviour:

This is only set when creating a module instead of a game. It adds the specified prefix to the beginning of the key of every new task, object, character etc. that is created from then on. This allows these items to be imported into a different game as a module without causing a conflict with its existing keys. It is a good idea to end your key prefix with the underscore "_" character (or a number) to prevent accidental key clashes with any keys that happen to start with the same letters as your prefix. Do NOT use any other symbols in your prefix! Only letters, numbers and the underscore can be used. Also, the first character of the prefix should be a letter A-Z.

If you wish to reserve a key prefix for a library module that you are going to publish, please add it to the following list to prevent conflicts with anybody elses library:

Please add all new libraries to the Libraries and modules page.