Warning: Private methods cannot be final as they are never overridden by other classes in /homepages/17/d480683305/htdocs/w/includes/actions/Action.php on line 67
 Character Walks - ADRIFT 5 Manual Wiki

Character walks are defined on the "Movement" tab of each character, and are similar to events in that they define a sequence of actions that are performed in order each time the player enters a command.

To do this tutorial you will need a game with several locations. We will be creating a guard who will walk along a predefined patrol route, so add a location called "Guard post" in the area you would like him to patrol.

Create a new character, give him the descriptor "a guard", and set his initial location to "Guard post".

To get our guard character to patrol along a specific path we need to create a new "Walk".

Open the guard character and select the "Movement" tab:

The movement page allows you to program one or more routes that this character will follow, and actions they will perform along the way.

Each of these independant routes and its associated actions is called a "Walk". A character can have several walks, but can only follow one walk at a time. 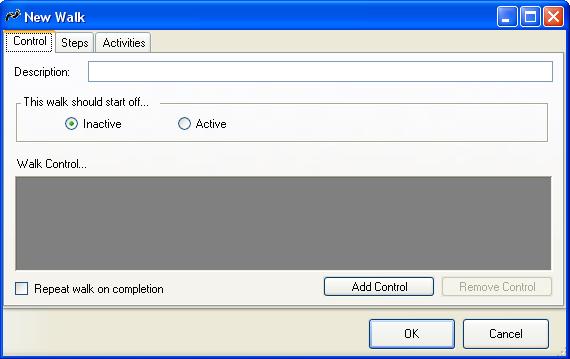 On the "Control" page enter the description "Guard Patrol" and select the "Active" radiobutton under "This walk should start off...". This will cause the guard to start walking as soon as the game starts.

Tick the "Repeat on completion" box. This will make the guard start walking his patrol route again from the beginning as soon as he completes it.

Select the "Steps" tab and press the "Add Step" button to create a new step and open the "Step of Walk" dialog box: 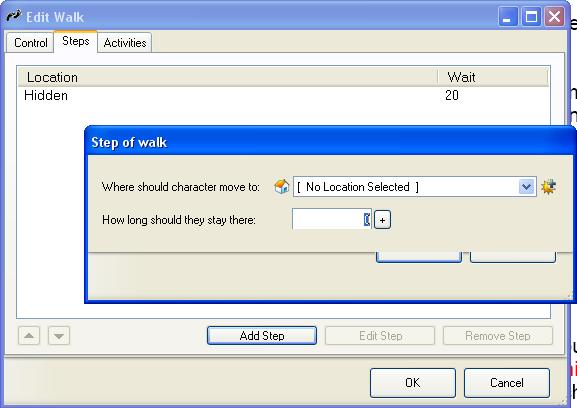 Select a location adjacent to the guard post, and how long they should stay there (the number of turns the player will make before the guard moves to the next location).

The two buttons at the bottom are cutoff by a bug. They are "OK" on the left and "Cancel" on the right. Click the OK button.

Add several more steps, moving the guard to each location along his patrol route until they finally get back to the guard post. Have the guard stay at the guard post for several turns before repeating the walk. 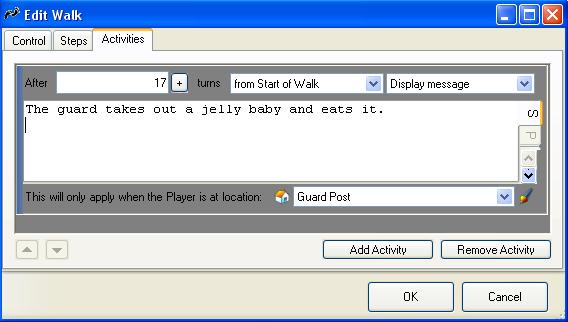 You can make various things happen at different stages during the walk. In the example i have the guard eat a jelly-baby 17 turns after the start of each of his patrol walks.

By examining the number of turns you have him remain at each location you can determine how many turns it will take for him to get to a particular location.

In my case 17 turns would have him complete his patrol and be in the middle of the period where he is waiting at the guard post.

Note that i have added a restriction that "This will only apply when the player is at location: the guard post". This is because the player can only see the guard eating the jelly baby if they are at the same location.

If an activity can be seen or heard from further away then you could instead specify that the player must be in a particular location group.