A "State List" property type has two or more options that you can choose from, each of which is a single word.

If the state list only has two options, then it is displayed as two side-by-side radio buttons and you simply select the one you want. If you select the "Object can be opened and closed" property on the properties page of an object, then you will see the mandatory "Open status" property which has two radio buttons marked "Open" and "Closed".

The "Gender" property of characters is an example of a state-list with more than two options. In this case a drop-down list is displayed from which you can select the wanted option.

To create a new value list, select the "State List" type and then in the bottom panel give each state a name: 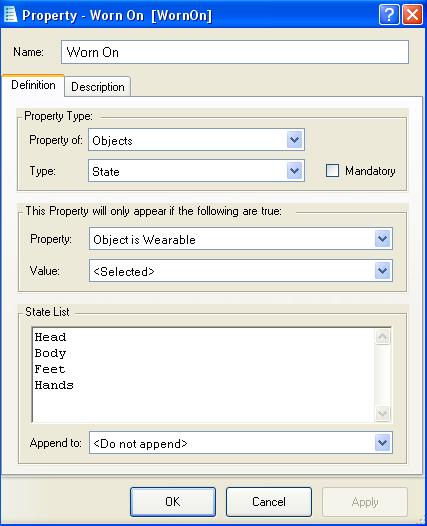 For example, the "Locked status" property in the standard library contains the single state "Locked" and is set to append to the "Open status" property which contains the two states "Open" and "Closed".
"Locked status" is set to appear only if the "Object can be Locked" property has been selected.
A state-list property set to append to another state list never appears itself. Instead, when the "Object can be Locked" property is selected, its contents are merged with the states of the "Open status" state-list so that it now has three states to choose from instead of the original two.