Difference between revisions of "Group Functions"

The group functions operate on several item keys at once.

There are four types of groups, those containing Characters, Objects, Locations, or any Items.

A group of item keys are separated by the pipe "|" symbol, and looks like these if printed:

The group functions are appended to a reference or function that generates more than one key, and is used to format it for output or to count the number of items in the list.

Item groups can be generated from:

If you enter any of these followed by a full stop ".", a menu will popup which contains the "Count" and "List" functions plus several filter functions.

This number can then be printed or used in an expression

This function can only be used with integer properties.

It adds together the value of this property for all of the items in the group to give the total.

eg. %Player%.Worn.Weight.Sum would give the total weight of all of the items that the player character is wearing.

The list function is used to format a group of items for output. It reads the name of each item and prints them in a comma-delimited list with "and" or "or" inserted between the last two items.

Up to 4 parameters can be added to the "List" function, in any order, to control the formatting of the text output.

Three of these parameters have two settings, and if you type a "(" character immediately after the "List" function, the menu system will display a list of these seven options:

This parameter indicates whether the list should include the contents of each item as well as the items themselves.

The default value is True, so the text "You are carrying %player%.Held.List" might print:

If instead you enter "You are carrying %player%.Held.List(False)" you will only get:

This parameter controls whether each item is printed with the definite ("the box") or indefinite, which prints the actual article of the object.

The default is Definite, so "You pick up %player%.Held.List" will print:

while "You can see %player%.Held.List(Indefinite) the other side of the portal" will print:

This parameter chooses the word that is placed between the last two items in the list.

"You pick up %player%.Held.List" will print:

but if you want to use a negative sentence, it would be better to write "You can't pick up %player%.Held.List(or)" which will substitute the word "or" in place of the word "and":

Group1.List(Rows) - Each item will be listed on a new line:

The options with the

icon are selection-only properties that can be used to filter the group.

Any number of these can be appended to the function to filter the group so it only includes the items with those properties selected.

The function "%character%.Worn.Edible.Readable.List" will take the group of objects currently being worn by the referenced character, select only those that are both edible and readable, then print them in a comma delimited list.

If you enter the key of a character group, or use one of the 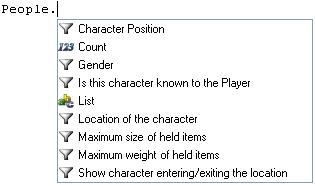 These functions filter a group of characters to only include those with the property selected. These are Boolean functions and correspond to selection-only properties. To filter for characters that dont have this property specify False in parentheses after the function name, eg. People.Known(False)

If you enter the key of an object group, or use one of the 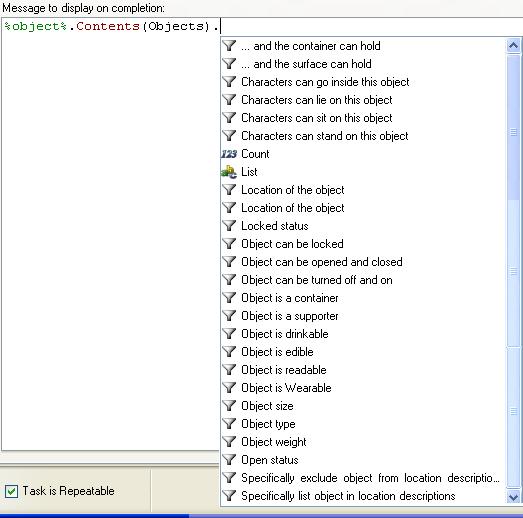 These functions filter a list of objects to only include those with the property selected. To filter for objects that dont have this property specify False in parentheses after the property name, eg. %Player%.Held.Lockable(False)

These functions filter a list of objects to only include those with the indicated state property set to the state value that is chosen as its parameter. The possible states for each property are listed in parentheses after the function name.

Locations initially have no properties, so you will not see any filter functions listed unless you create your own selection-only properties or state properties for locations.