Difference between revisions of "Conversations with other characters"

This tutorial describes how to use conversation tree's to give a character the ability to converse with the player in a natural way, responding in a sensible way to what the player tells them and questions asked of them.

The sample game used in this tutorial is written to C:\Program Files\Common Files\ADRIFT\Samples\Conversation.taf (or the equivalent on your operating system) by the ADRIFT installer.

Double click on it to open it in the developer, then press the run button to start the game and follow this tutorial.

This sample has two locations, and at one of these locations is a bed of flowers and a character called Mildred.

When the game starts you will get the introduction, a description of the initial location (and Mildred) and a mention of the exit to the south:

The title in red is from the Bibliography page of the Options.

The first text to be output is from the "Introduction & end of game" dialog box. 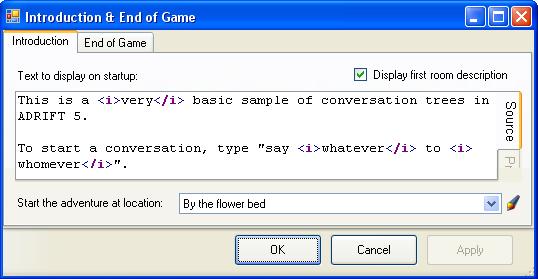 Because "Display first room description" is ticked, the short (in boldface) and long description of the location is shown next.

When a character is present at a location, we would normally get a message like "The old lady is here", but in this case the mildred character has the following in her "What to show when character is in location" property.

The %CharacterName% function is used to ensure that mildred is described as "an old lady" initially, then by her proper name once the player learns what it is. The %PCase[]% function capitalises the first letter.

Finally "An exit leads south" is printed because the "Show exits from locations as well as descriptions" option has been ticked on the General tab of the games' Options.

The simplest way to do a conversation is to write a "talk to %character%" task which simply displays a pre-written conversation. This tutorial is for a much more interactive conversation, but we should still provide a response if the player types this.

We dont know Mildred's name yet, so enter the command "talk to old lady". A "Talk to character" general task has been created which contains the message:

So the player will see:

This has been added to explain to the player that they need to use the "say", "ask" or "tell" commands in a conversation.

Conversations are usually specific to a particular character, and if you open the Mildred character and go to the Conversation tab you will see listed the thirteen conversation topics that have been added to this character. 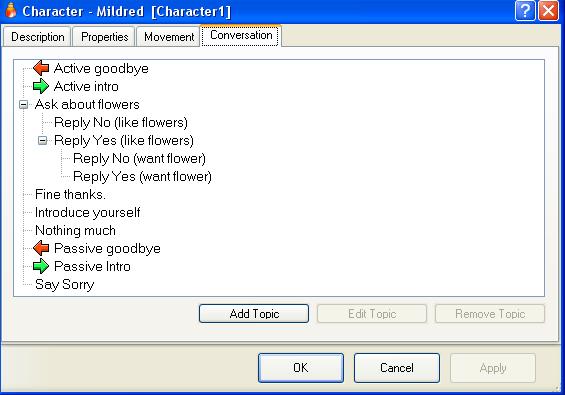 Usually the first thing a character will say is one of the introduction topics, shown with a green arrow, which will either be active or passive. 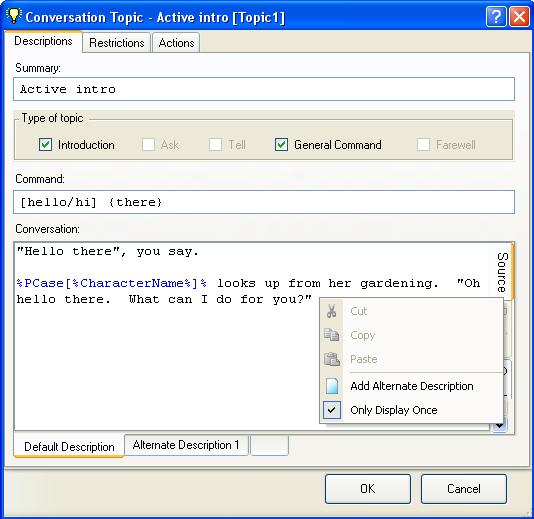 Notice that under "Type of topic" that both "Introduction" and "General Command" are selected.

Selecting "Introduction" indicates that this will be the first thing that the character will say, and prevents the passive introduction from being shown.

Selecting "General Command" allows you to enter a command in the same way as in a general task. But conversation commands must be preceeded by the command "say", so the player must type "say hello" to trigger the active introduction:

If the player had typed "say hello to old lady" then they would obviously be talking to Mildred. Because they did not say who they wanted to talk to, ADRIFT automatically checked to see if there was one other character in the same location and picked that character (printing the "to an old lady" message to say who was chosen).

If there were multiple characters at the same location then the player would have to say who they wanted to say hello to, however once a conversation has been started it will be assumed that they will continue talking to the same character and so they wont have to enter the characters name again until they leave that conversation.

Note that the default description has been set to display only once, so if we say hello again we get Alternate Description 1 which will print:

Using the Restriction: be in conversation with

The description for Mildred says:

But it also has two alternate descriptions:

and one with the restriction "The player character must be in conversation with character Mildred", set to display after default.

If you examine the old lady now, while you are in conversation with her, the restriction will pass and show the default description followed by the second alternate description:

If we leave the conversation (by saying goodbye, which is described in the next section) the restriction will now fail, displaying the default description followed by alternate description 1.

This is the "Active goodbye" topic. It has both "Farewell" (which exits the conversation) and "General Command" selected.

The command for this topic must be preceeded by "Say", so the player can type "say goodbye", "say bye", or "say cheerio".

If you look at the "Pick flowers" task you will see that it contains a response from Mildred. Because she has spoken to the player we need to put her in conversation mode, so on the Actions tab you will see the action "Enter conversation with character Mildred".

Note that neither the Active or Passive introduction is shown in this case. It is assumed that the task that performs this action will itself print everything that Mildred needs to say at this time.

Topics that have "General Command" selected, but neither "Introduction" or "Farewell", are things that the player can say to the character during the conversation.

In the example, these are the "Fine thanks", "Introduce yourself", "Nothing much" and "Say Sorry" topics.

Here is the "Introduce yourself" topic: 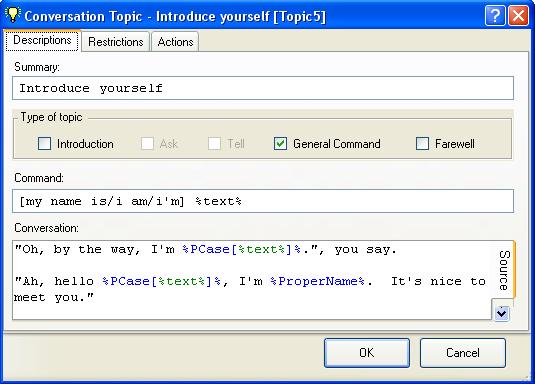 The text of the conversation repeats the text they entered back to them, and tells the player Mildreds proper name.

The remaining topic types are "Ask" and "Tell".

These both use a comma separated list of keywords which are matched to the players input.

When the player Ask's Mildred about something, whatever words they type are checked against the keywords in all the Ask topics and whichever topic is the best match is displayed. 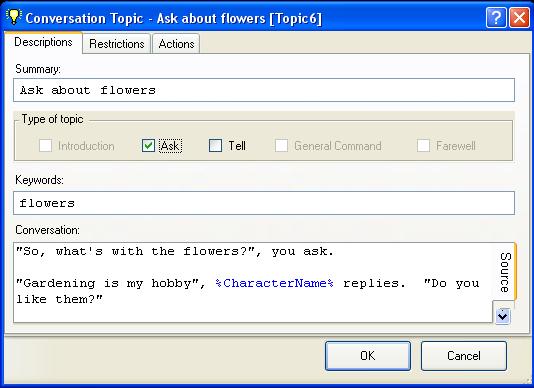 If the player now types "ask about" followed by any text that contains the word "flowers", then this topic will be displayed:

On Mildred's conversation tab you will have noticed that several of the topics are indented under the "ask about flowers" topic.

These define topics that are only used when their parent topic has just been displayed.

The "ask about flowers" topic ends with Mildred asking the player "Do you like them?".

If the player answers this question by typing "say no", then the general command "Reply No (want flower)" topic will be run.

If they "say yes" then Mildred will ask if you want one, which moves the conversation to the two topics under that node and which also accept yes/no answers in this particular example.

The "Reply Yes (want flower)" topic contains an action which moves a "flower" object into the players inventory, so if the player answers "say yes" to both questions then they will get the flower:

The passive goodbye can be triggered either by leaving the location or starting a conversation with a different character.

Move south to the other location:

If you move north again you will see that Mildred is now tending the flowers, and is not in conversation with you.

The passive introduction is shown if you start a conversation with the character by using any Ask, Tell or Say topic except for an Active Intro.

If we had asked Mildred about the flowers while we were NOT in conversation with her, she would have given her passive introduction before responding to the question.